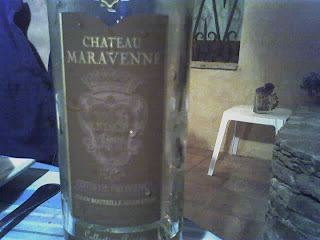 ... near La Londe, at the western end of the Massif des Maures, is Chateau Maravenne. This past August, late one afternoon, I stumbled upon it by chance when we were looking for a room. We'd spent the day near Cabasson at a beach (rustic, with white sand, and half-empty except for families with sandpails and shovels). Afterward, we decided to stay nearby rather than push on, and so we scanned phone book listings. The Chateau, a mile or two north of a light industrial park, was an old manor house, half-renovated, half shambolic, and set among vineyards. More about those vineyards in a moment.

Yes, they had a room, said Luc, a hulking mustachioed Provencal in shorts and flip-flops.

Was there somewhere we could eat?

He squinted and held up a knife... a paring knife. In his other hand was peach, a spiral of peach-skin hanging down from it.

After stowing our bags in a room upstairs, showering, a moment relaxing on the terrace outside our room, we took one of the half dozen tables in the garden. We ordered a bottle of rose, a product of those vines nearby. Fifteen euros and superb. Photo from my phone of that bottle at the end of the meal posted above. The plan offered bread with olive and anchovy spreads, home-made gravlax with creme fraiche, then osso buco Provencal... with local herbs as well as orange peel, and then tarte tatin. Twenty euros.

The next morning, before departure, browsing down among the wine barrels, we saw a farmer fill up a large plastic container from what looked like a gasoline hose in the wall. Two gallons of red to go.

We'd soon be staying with friends in Plascassier, and so bought them a bottle of the Reserve, twelve euros. That evening our copains kindly opened our gift and shared it out. Our host, after the first taste, pulled a face, as if he wished he'd put it back for himself rather than shared it out immediately.

He turned around like Orpheus and fire was everywhere

Walking down hereditary roads reluctant and slow
It’s an incandescence that only blood knows
Distant like he was for all his success and sorrow
He closes his eyes, with their white Irises
There’s hardly a soul left in eyes that blue

Like twigs broken on a trail
A voice distracts him
He says good-bye and - looks back
As the fog lowers on the other side of the world
Plunged into the water, down fast – helpless, lightless
Down an isle of cypress

Trailed by the furies, who so loudly follow him
He begs them to remember;
“I once led sailors to their destination safely
I drown out the temptation of sirens
I knew the seas”

Now across the ocean that reaches far east
He walks across this eternal prairie
And remembers the fruits of the desert; apricots, roses and peaches
And riding in an elevator in Monterey
A dove-drawn picture flooded with memory and cunning desire

At home visitors come home in from the rain
He’s praying for Dutch courage
Standing under a stoic flag
Why is his devotion so numb?

The scene changes again
Further down – past the volcano
Are oxcarts and dirty, closed gates
The crowds have had the romance beaten out of them
They mill on the cobblestones
Plaintive and damaged

It was never a question of character
He’d always find what was distinguished in what other people overlooked
But this cloud that hovered tonight, boy
Was surely the shadow of the world
The royal palms and bent coconut palms swung and snapped
Only the paper weights – whose use had seemed minimal
Before, decorative at best
now saved all he had left

Old letters just left
To love like that, sloppy, and have it spill over –
To divulge like that and vanish
Letters, in a box, in a closet, in an attic, in the sky
He didn’t like to be buried like that

He stands behind a heavy door
The wild honeysuckle perfume is potent
It drowns out the mixture of passionflowers and orchids
Even the hummingbirds from Brazil
Or the hours in the afternoon playing chess
Against his infant thoughts of locusts and mulberries
Behind the grove of oak and beeches
He’s living a noble lie; the nobility of impulse
Which was always as chaotic as the void surrounding him

His Olympian detachment –
His crudeness worthy of a turbulent sky
He’d have to exercise courtliness to understand savagery
He had loved
Out there among the Dutch elms and mango trees of exile
He knew, as Einstein said, that
“The moon exists even if no one is watching it”

Posted with the author's permission
Posted by James Scott Linville at 10:40 AM No comments:

James Scott Linville
... has contributed journalism to The Financial Times, The Paris Review, The Spectator, The Wall Street Journal, The New York Times, Monocle, Esquire, Harpers, Standpoint magazine, the Sunday Telegraph, the BBC, the Pushcart Prize Anthology, and The Indian Quarterly... as well as photography to Elle. He has reported from the US, UK, Chile, Sweden, Mexico, Morocco, France, Croatia, Turkey, Egypt, and Lebanon.