US Secretary of State: ""The world is watching the situation in Libya with alarm."

"I want to show that I'm in Tripoli and not in Venezuela. Do not believe the channels belonging to stray dogs," he said, under a large umbrella, leaning out of the front seat of a van.

The video below is in its way truly alarming.

UPDATE: Kaddafi has just pledged to "cleanse Libya house by house." This man has to be stopped NOW. Where the heck is President Obama? Liberal internationalism... is it not alive?!

UPDATE 2: As Lee Smith says in "The President's Deafening Silence on Libya":

The Obama administration would do well to exercise some moral clarity regarding a man whose personal demeanor has long symbolized the most repressively autocratic and obscurantist features of Arab political culture—a man who reportedly has now, among other things, dispatched his air force to put down the people he rules. The White House’s silence is perhaps explained by the idea that a public statement will do more harm than good....If there really is an argument in the administration about what to say and do concerning Libya, we can hope that means that there is at least one faction in the White House that sees the world, and America’s role in it, clearly. U.S. support does not undermine a cause; when it is a factor at all, it lends prestige to it. In any case, neither Qaddafi nor the opposition is waving Old Glory. It is a Libyan affair, a Libyan conflict fought over Libyan issues, with the power to rule Libya in the balance. The White House’s task is to shape events in Libya to suit U.S. interests—and silence doesn’t cut it.

Read the whole thing here.
Posted by James Scott Linville at 9:25 AM No comments:

... some useful links for top stories of the day:

The US accuses the UK of legitimizing Gaddafi, via the Telegraph. Seems to me a team effort, though Britain must have second thoughts about their investment in the regime, the release of the Lockerbie terrorist Megrahi.

Saudis offer Bahrain rulers support against opposition, via Jerusalem Post. (I'm astonished the Saudis are not keeping their heads down.)

If true, this is BIG... but it seems unreliable to me... US warships box in Iranian flotilla, delay Suez passage, read HERE.

EU pledges support to Arab World in Transition, via NYT.

A look at Germany's illegal sale of technology to Iran, here.

A series of excellent articles by Lee Smith at the Weekly Standard.

Stacy McCain responds to the NYT's assertion that this is "the end of blogging." The NYT are authoritative on a number of things, but not that.
Posted by James Scott Linville at 8:14 PM No comments:

Funny to return after some months away from this space only to learn that, according to the NYT, we now live in the time of Twitter. I'd been away finishing a film script and supporting the release of another movie, a truly ancient medium apparently, and suddenly now everything has changed. Frankly, I'm not buying it, and so we blog on...

The other day I was discussing electronic media with a manuscript archivist from Yale's Beinecke Library. When I assembled Paris Review's archives for sale to a research library in 1999 there were an array of artifacts: handwritten postcards and manuscripts, typed manuscripts, international cables between the NY and Paris offices, heavy-bound books recording notes from business phone calls, corrected printers' galleys, reel-to-reel tapes, cassette tapes and so forth. At the last moment, I copied two of the hard drives form the office computers and threw those in as well. The libraries who examined the archives said it was the first time they'd had to consider handling digital archives and they had no idea how best to preserve them. Last week I asked the Beinecke curator about this and she said, "We have all sorts of files composed on processing programs that aren't available anymore. Word Star?"

Friends, in the long term the odds are on objects. In the meantime, we discourse in prose on electronic media.

Stacy McCain refutes the NYT's claim that blogging has died. (The NYT, by the way, attempt to use terms of art in suggesting that blogging on Facebook is not blogging.)

Certainly I've found some useful links on twitter, and some have been composing "six word novels" but by and large it's a river of gibberish, designed to induce ADD. Consider this twitter from a Twitterer considered by the Independent to be one of the top in the UK: 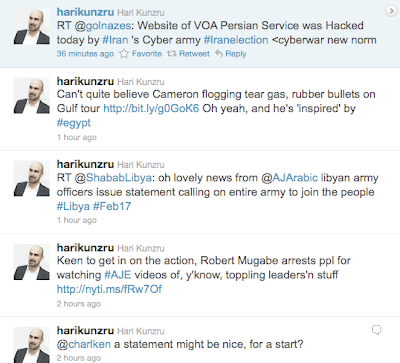 There are many leads to good information here, but there is less information here than a old fashioned news ticker would provide, and what has happened to the voice of this fine novelist? Nowhere.

Give us the blog.
Posted by James Scott Linville at 7:52 PM 2 comments:

The Main Point, and Its Mission

When I started The Main Point blog I described its purpose as a place for observations on culture and politics, news, very short stories, poems, photos, missives from friends.

On return to the blog I notice that balance has been out of whack and that my first post is entirely consumed with current events and conflict. As a former editor of a literary magazine and an arts journalist such had not been intention at the outset, but it is perhaps a reflection of the times we live in.

With the indulgence of my few followers, and since some of you are new to TMP, I'm going to take another look back now at a few earlier posts more in line with my original intentions and with, um, my actual areas of expertise. So herewith a kind of greatest hits for TMP:

The great Japanese filmmaker Akira Kurosawa is best known for his samurai epics, but in the 1950s he was fascinated by hard-boiled crime stories and noir. In Hollywood there is now a cult fascination, led by Martin Scorcese, with Kurosawa's movie "High and Low." "The Bad Sleep Well" is worth similar reverence and has Shakespearean dimensions, but my favorite from that period is "Stray Dog," thoughts on which HERE.

Andres Velasco, until recently the Chilean economics minister, spoke with me in an interview for Monocle magazine, about the proper role of stimulus spending and his notion of counter-cyclical fiscal policies, HERE.

A short story? A very short story... Ernest Hemingway wrote the saddest, and it can be read HERE.

TMP received a missive from the eminent psychoanalyst and business consultant Michael Maccoby on his mentor Erich Fromm, HERE.

Extraordinary times? This month I'm reminded of 1848. Usually though I think back to 1958 and what that must have been like.

Tony Curtis died this winter. Years ago I interviewed Billy Wilder for The Paris Review and he recounted directing Curtis in "Some Like It Hot," as recounted HERE.

A collection of memories about my old boss George Plimpton HERE.

A number of fascinating missives from novelist and military historian Caleb Carr HERE. Particularly of interest... Carr's speculation on Gunter Grass's life in the 10th SS Panzer division during WWII.

An archive of contributed poetry HERE, including work by Charles Wright, Pierre Martory, and the heroic Jeannie Vanasco.
Posted by James Scott Linville at 5:09 PM No comments:

A Look Back at Hard Questions on Iraq and Afghanistan

I'm back, then. Returned after an extended hiatus to finish a film adaptation of a Raymond Chandler novel, and to support the release of "The Garden of Eden."

I'd like to start by taking a look back at some hard questions I rhetorically posed in July 2008, during the run-up to the presidential election, on my Standpoint magazine blog to then-Senator Obama. Time changes one's perspective. Iraq is now comparatively stable and may, with its scrappy educated population and its untapped oil wealth, have a promising economic future. Afghanistan continues to be a challenge in terms of conflict, politics and especially development. With both countries there should be no easy answers. Here are the hard questions I posed in July 2008:

UPDATE: Some of these challenging questions are addressed in a new book I've just run across by Bing West entitled "The Wrong War: Strategy and Way Out of Afghanistan." A comprehensive review, admiring with caveats, is offered by Andrew Exum HERE.
Posted by James Scott Linville at 11:27 AM No comments:

James Scott Linville
... has contributed journalism to The Financial Times, The Paris Review, The Spectator, The Wall Street Journal, The New York Times, Monocle, Esquire, Harpers, Standpoint magazine, the Sunday Telegraph, the BBC, the Pushcart Prize Anthology, and The Indian Quarterly... as well as photography to Elle. He has reported from the US, UK, Chile, Sweden, Mexico, Morocco, France, Croatia, Turkey, Egypt, and Lebanon.